Another way to mount remote virtual disks ? ... so what ....
Well - mounting a disk via iSCSI has one major advantage compared to other procedures like using mount-tools ...
A disk mounted via iSCSI appears in diskmanagement - that means it can be handled by partitioning tools.
This is not possible wihen we mount a virtual disk with the Virtual Disk Development Kit for example.

Consider you need to P2V a physical system into a virtual machine on a ESX farm.
The physical system is a large fileserver and you want to clone the data disk with the fileshares directly
into a RDM or LUN on the SAN of the farm. This is a killer scenario for Coldclone via iSCSI running MOA.
In other scenarions doing coldclones via iSCSI may not come as natural ... but it is worth to consider it.

All recent versions of MOA support installation on the fly of Starwind 4 and Starport.
MOA 64 also has buildin iSCSI support. You just have to configure the service in Debian.
For MOA 2.4 have a look at the LODR packages for Starwind and Starport which simplify the setup.

MOA can be used as the iSCSI-Target and as the iSCSI-Initiator.
In the following MOA-usage example both roles are used so it is a nice example to practice iSCSI with your MOA-system.

With my limited hardware resources I used the following scenario: one physical host is used as P2V-source.
It is a multiboot machine with Windows 2003 and 2008 R2 and one data-partition.

Diskmanagement of the target

The target system is a virtual machine.
It has one brand new 80 Gb unpartitioned virtual disk.
It was booted into a MOA 2.4 LiveCD - see diskmanagement:

Diskmanagement of the source

In the Starwind GUI connect to localhost 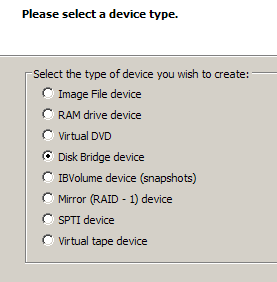 In the next step we assign the virtual disk. Note the VMware in the vendor name. 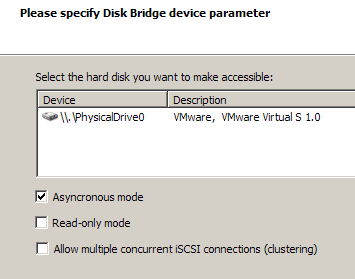 Assign a name to the iSCSI-target 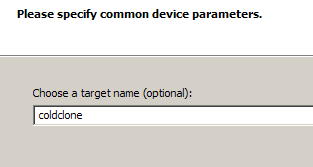 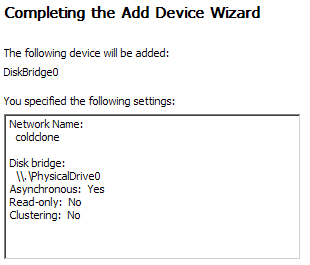 After the wizard finished the log-screen should look like this.
On the target all work is done for now - we can leave it alone. 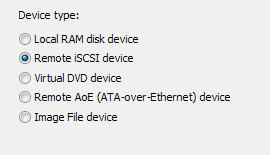 enter the IP of the MOA system running inside the VM

and finish the wizard. 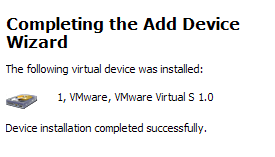 The Clone or Copy process ...

Now that the target is mounted we need to partition it. Open MOA diskmanagement.
A new blank disk has appeared in the list. This is the one connected via iSCSI.
This disk is actually a vmdk file on the ESX or Workstation ...

Now that we have one system which has both target and source disks mounted
we can use all types of tools to do the actual copies.

Good old ghost32 is just one example ... robocopy may be the first choice in other scenarios ... 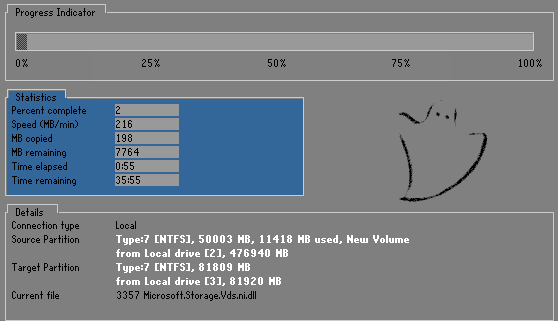